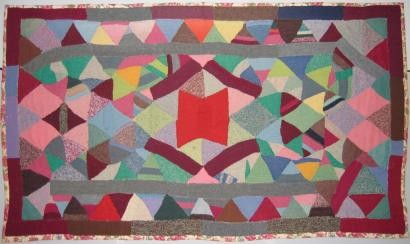 This is a knitted quilt believed to have been made by Miss Charlotte Stonebridge, known as Lot and Lottie. She was born in 1898 and died in 1989, and lived at Bryn Awel, Castle Road, Rhayader, where she worked as a hairdresser. Charlotte courted a man for many years, but they never married, perhaps because she looked after her parents. When he became very ill she nursed him in her home until his death. Charlotte used an upstairs room at home for her hairdressing. She carried jugs of boiling water, from the open fire of the kitchen range, upstairs. The pungent smell of methylated spirits, from a little burner to heat the curling irons, permeated the house.

The quilt top (1680mm x 975mm) is made up of knitted shapes - triangles, rectangles and diamonds. 4 ply and double knitting wool have been knitted mainly in stocking stitch, with some moss stitch. There are a mixture of plain wools and marls. The wadding is a hand-woven woollen blanket. This is an appliqué piece rather than patchwork, as the shapes have been sewn to the blanket.  However, it has been done in a patchwork style with a central medallion and borders. It has been backed with a floral cotton plain weave, a furnishing fabric, possibly from the 1940s. Then all three layers were tied together with a white cotton thread.

The knitted quilt inspired a contemporary piece, 2009-8, now also in the collection, made in Spring 2009 by the Llanidloes Knitting & Crochet group. Both quilts were exhibited at the Minerva Arts Centre in the 2009 summer show.