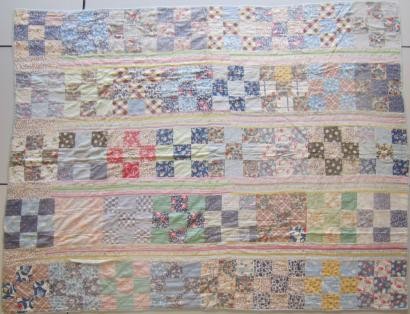 This large patchwork quilt was made in Canada and sent to Britain with food parcels by the Red Cross during the Second World War. It eventually ended up in Towyn, a small seaside town in mid west Wales. The quilt was originally documented at The Quilters’ Guild British Quilt Heritage Project in 1990 in Shrewsbury, and became part of our collection in 2013.

Quilts made for the war effort were put together quickly and simply using everyday fabrics and basic techniques by Canadian women using the sewing rooms of their Red Cross branches. The effort was co-ordinated by the Standardised Workroom – and then the quilts distributed on a massive scale in Britain to people who had often been bombed out of their own homes.

The patchwork features nine patch blocks machine stitched and joined to form five main strips. These are each divided by four narrow strips of fabric. There are various floral fabrics, checks, and some recycled children’s clothes featuring bicycles, fish and children. The wadding consists of two light blankets  made of mixed fibres. The quilt has been hand quilted in a white thread in chevrons on the blocks. The narrow strips are quilted in long lines.

The reverse is made of unbleached cotton feed sacks which have been joined together – recycling of the sacks was common by North American quilters.