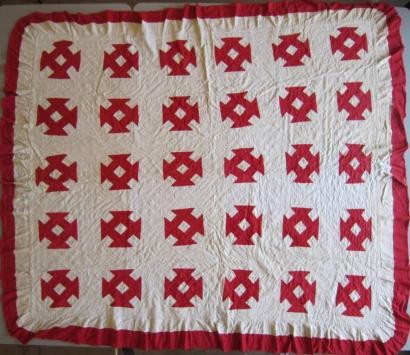 This is a red and white patchwork quilt made in Wales featuring the Churn Dash block. The surname Davies has been hand stitched  in red in one corner of the quilt on the reverse side.

The Churn Dash is a traditional nine patch quilt block pattern, originating between 1800 and 1849 in America. The block is said to resemble the stick or “dash” which was used to churn butter. However, it is just one of many names used for the block, others include: Monkey Wrench, Broken Plate and Hole in the Barn Door. Friends would often share favourite quilt blocks, by letter or when meeting up socially. By the mid 19th century popular patterns were being published in magazines and made available to an even wider audience across the Atlantic, including Welsh quilters. When Welsh families emigrated to America the keen sewers probably sent quilt patterns back to family members still at home.