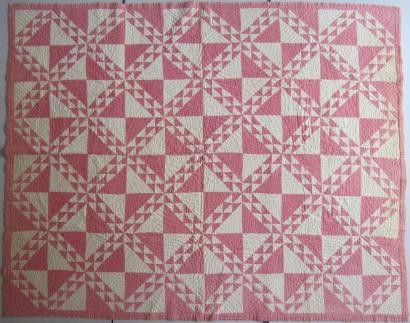 This is a block patchwork quilt made by a Welsh woman returning to her homeland from America in the late nineteenth century.

It was completed in Ceredigion in west Wales, in a hill farming area known as “Soar-y-mynydd,” several miles south-west of the market town of Tregaron. The great-great-great-grandmother of the donor travelled to America in the 1860s, hoping to start a new life. However, she later returned to Wales. It is believed that the quilt was cut out in America, and then pieced during the long return voyage.

The patchwork is typically American, and probably influenced by the quilter’s short stay overseas. The block is known as “Birds in the Air.” Friends would often share favourite quilt blocks, by letter or when meeting up socially. By the mid 19th century popular patterns were being published in magazines and made available to an even wider audience.

This red and white patchwork quilt is made of cotton fabrics in a faded red and also white, and hand quilted in a white thread in a medallion style. Three Welsh woollen blankets make up the wadding. The reverse fabric is made up of three strips of cotton fabric, featuring sprigs and spots.