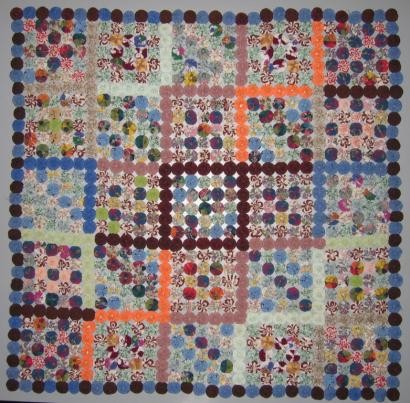 This is a pair of Suffolk Puffs table coverlets made in Trottiscliffe (pronounced ‘Trosley’), Kent, south-east England, during the Second World War (1939 – 1945), probably in an air raid shelter. The coverlets were donated to The Quilt Association in 2004.

Suffolk Puffs are gathered circles of fabric, sometimes known as yo-yos. They were very popular during the early years of the 20th century and are named after the Suffolk sheep wool which was often used to stuff them. The puffs were ideal for using up small scraps of fabric, or recycling old clothes and could be made by children or beginner patchworkers.

The first coverlet measures 715 x 715mm, and the second 414 x 965 mm. The puffs are 25mm in diameter, and made of cotton and rayon fabrics in various colours. The patterns have been planned to a degree, with plain puffs dividing the patterned blocks, almost like sashing. The puffs have been hand sewn together on each of the four edges.