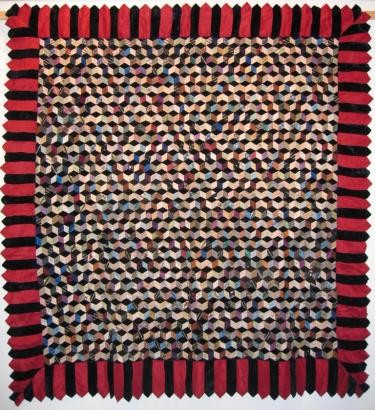 It measures 2083 x 1990 mm, and is made of silks and velvets. There is a huge variety of silks including figures, printed, twills, ribbed, plains. Some of these have degraded over the years – the piece probably dates from about 1880 – but considering its age it is in good condition.

The filling is a woollen black fabric which could be a blanket. There is a red and black border which may be a later addition. The reverse red cotton sateen was certainly added later – it has been machine stitched but the stitching does not come through to the front.

The tumbling blocks quilt has been exhibited at the Minerva Arts Centre during a summer show, and also at Ludlow, Shropshire and Holyhead, Anglesey.