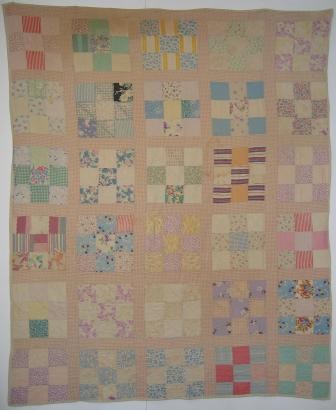 This is a Canadian Red Cross quilt (Petrolia branch) which was given to a family from Kent during the Second World War. Doris Evelyn Jones (3.6.1913 – 20.1.2007) lived in Beckenham, Kent, and the area was bombed several times. Doris was eventually evacuated with her baby son Brian to Yorkshire. Doris had married her husband George Ernest Jones on 20 January 1940. George was in the army but did not serve abroad. As an artist and draughtsman he spent the war drawing maps. The work was highly secretive. He died aged 54 years in 1971.

Doris was sleeping in an air raid shelter with her son Brian when they were bombed. The family had to be dug out of the shelter. Their house was destroyed. Doris went to a centre to get food and help, and all they had left were “bloomin’ quilts.” Doris said – “I don’t want a quilt, I just want something to eat.” But all the others were taking them, so she took one too. Someone took her in and she was evacuated to Halifax on a train, wearing a label.

The quilt (2105 x 1710mm) is a nine patch piece, with 30 blocks made of various cotton fabrics. It has cotton wadding, and minimal quilting around and across the blocks to hold it together in a white thread. The reverse is a blue striped flannelette sheet, with a Canadian Red Cross label in the bottom corner.