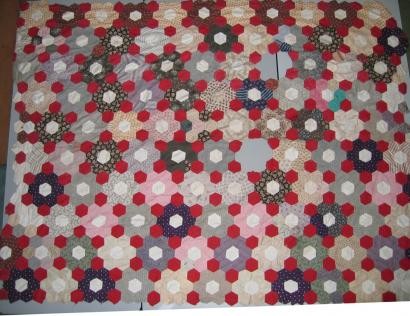 This is an unfinished hexagon top with papers which has an interesting selection of fabrics dating from the mid 1800s to 1880s. It was donated as one of a group of seven items, including patchwork, appliqué and one wholecloth. Another wholecloth quilt (2009-1-H)  from the same source in Cheshire was later purchased by the Association.

This and other items in this collection may have been made in North Wales. Here we can find various clues in the papers on the reverse of the hexagons, including one with a 2 Jan 1888 Conwy postmark. However, this could be misleading, it could just mean that the patchworker received letters from North Wales!

The following fabrics were discussed at a workshop with Philip Sykas in September 2009: