The biennial exhibition of the local quilt group - the Welsh Heritage Quilters.

The exhibition showcases the work of members, a diverse group of professional quilters, talented amateurs, and those just beginning their journey in patchwork and quilting.

True Colours was chosen as the title of this exhibition not only because we have tried to use colours in a thoughtful and meaningful way in our work but also because the word true, as well as meaning that something is correct, can also be used to indicate loyalty, to a country or a cause, just as all soldiers throughout time have carried their colours, or flat, on to the battlefield.

The centenary of the 1918 Armistice allows us to look again at the symbolism of the colour red. Red has long been associated with danger, anger and violence as well as with fire and blood. In 1915 John McCrae wrote his poem In Flanders Fields. Its opening lines referred to the poppies which were the first flowers to appear in the battlefields in which lay the remains of the fallen, so the poppy came to represent the sacrifice made by those who died in World War One and later conflicts. 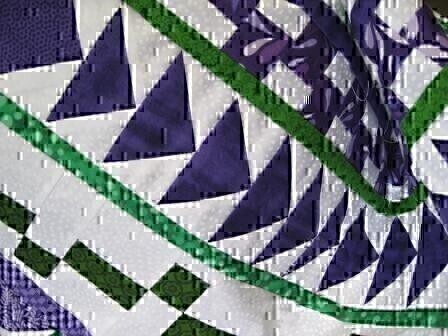 One hundred and ten years ago, in 1908, the Suffragettes of the Women's Social and Political Union or WSPU, adopted the colour scheme of purple, white and green. Emmeline Pethick-Lawrence, editor of the weekly newspaper Votes for Women wrote: "Purple as everyone knows is the royal colour, it stands for the royal blood that flows in the veins of every suffragette, the instinct of freedom and dignity... White stands for purity in private and public life... Green is the colour of hope and the emblem of Spring." Women were encouraged to "wear the colours" to show their support of the movement. Ranges of clothing (including underwear!), shoes and jewellery were produced in the colours, as well as tablecloths, china and there was even a women's bicycle made in the WSPU colours.

Welsh Heritage Quilters have recently adopted a new logo which features a daffodil, the national flower of Wales, on a green background. Along with the red of the Welsh dragon these represent the colours of Wales, another of our themes for this year in which we celebrate our Welsh heritage.

Exhibits include a wide variety of quilts plus a range of smaller items, many made in response to one of the many themes and challenges set by the group every two years to encourage creativity. Members also display work that they are proud of making.

The group meets on a Wednesday afternoon, 2 - 4pm, at the Minerva Art Centre, and new members are welcome.